profile
Experienced IT researcher with a solid knowledge of sourcing tools for attracting the best tech talents.
8 min

In 2022, COBOL programmers mostly maintain and update existing enterprise software that was developed using the COBOL scripting language. IBM, the Bank of America, Deloitte, Visa, UPS, American Express, and over 37,500 other companies still use applications deployed on a mainframe to process commercial data and manage cash operations. And all of them rely on experienced COBOL developers to assist in this process. So, how to find seasoned COBOL programmers today – and what are their remunerations in different countries?

In this article, I’ll answer these questions and share useful information about the COBOL international market size, the most important qualifications of COBOL developers, factors affecting the salary of these specialists, and an efficient way to hire COBOL programmers in Eastern Europe.

Even though the demand for COBOL skills was gradually decreasing from 1997 until 2012, it again surged after the COVID-19 pandemic. When over 9.5 million people lost their jobs in the USA due to the coronavirus, it overwhelmed American unemployment insurance systems. The government felt the urge to hire more COBOL developers, while IBM rushed to train new ones to address the COBOL system overloads.

Another reason why the COBOL language is still needed is that over $3 trillion of commerce runs through COBOL applications every day. Not to mention that on average 800 billion lines of COBOL code are in daily use in 2022. Moreover, 92% of business decision-makers in numerous industries like finance, auto, insurance, manufacturing, electrical, and government say that they see the applications built with COBOL as strategic.

But despite the need for COBOL skills, recruiting these developers is a challenge since most COBOL coders are currently either moving closer to retirement or have already retired. For instance, Reuters states that the average age of COBOL programmers is between 45 to 55 years. This also contributes to a relatively small talent pool of these coders – 2 million developers, with only 24,000 COBOL programmers working in the US.

Education and Expertise of Cobol Programmers among Worldwide Tech Companies

COBOL programmers usually have a bachelor’s or master’s degree in computer science, software engineering or similar fields. Beginner COBOL developers may also take certification programs in COBOL programming or an internship or training at companies that use COBOL-powered applications.

Regarding the soft skills of COBOL coders, they should have great concentration, focus, and troubleshooting skills to detect errors and debug legacy code for long periods of time. Self-education and curiosity must also be inherent in these developers to make it easier for them to update COBOL applications and integrate them with up-to-date technologies. Last but not least, a good COBOL developer needs to develop team management skills, since as they advance in their role they will be required to train junior and trainee COBOL developers.

Let our team of 40+ IT recruiters hire you skilful COBOL developers! ЗВ'ЯЗАТИСЬ

As a rule, COBOL developers who work in big tech product business earn more than their colleagues working in smaller software product companies or outsourcing/outstaffing firms. Beyond that, the COBOL programmer analyst salary and remuneration of COBOL developers are $20,000 higher in 2022 than they were a year ago.

I have already mentioned the desired skills set of a COBOL developer. And I’d like to point out that the average salary of a COBOL programmer with this tech stack in the US is $42,000-$147,000 per year. However, COBOL programmers who know other programming languages like Java, Python, or C++ and are proficient in DevOps usually get paid more than their colleagues without such skills.

Want to save 30% of cost on recruiting COBOL programmers? Let’s do this together in Eastern Europe! ЗВ'ЯЗАТИСЬ

I have already mentioned the countries with the highest and lowest COBOL developer salaries, as well as regions where you can find a balance between affordability and quality. Below you may look in detail at gross annual salaries of COBOL programmers in different regions as of October 2022:

Average Salary for a Cobol Programmer in North America

In Mexico, the average salary for a COBOL programmer is $27,000 yearly, while the Mainframe specialist of the same level earns $30,000.

The COBOL programmer starting salary in Brazil constitutes $18,000 per year.

The entry-level COBOL developer salary in Germany is $42,000 per year, while the senior-level salary equals $78,000.

The app developer COBOL salary among French specialists is the same as in Germany.

In Spain, the Mainframe COBOL programmer salary is $63,000 annually for senior-level positions.

The COBOL developer average salary among lead Norwegian coders is $87,000 per annum.

In the Netherlands, the same specialists earn $96,000 per year.

The average COBOL software developer salary in Austria is $60,000, while Mainframe coders of the same level earn $54,000 per year.

Romanian Mainframe COBOL developers have a yearly compensation of $27,000 on average.

In Hungary, the starting salary for a COBOL developer is $18,000 per year, just like in Poland.

The salary estimate for a COBOL developer in Japan is $48,000, while Mainframe specialists receive an annual remuneration of $60,000.

The success salary or highest of South Korean COBOL coders is $60,000 among lead positions.

Average Salary for a Cobol Programmer in India

Average Salary for a Cobol Programmer in Israel

Average Salary for a Cobol Programmer in Australia

Is it worth hiring a COBOL programmer in 2022?

In case the apps of your company were developed in COBOL and still faultlessly run on mainframes, you shouldn’t hesitate to recruit an experienced COBOL developer. And even if your software is accumulating technical debt and becoming hard to maintain, a COBOL developer who knows relevant scripting languages like Java can help you modernize your systems and reduce the number of legacy constraints.

When Dotmatics decided to set up its own research and development software team in Eastern Europe, they sought assistance at Alcor. The client wanted to hire 30 talented developers in 12 months, and our team hired all of them by conducting several tech recruitment outsourcing consultations, adjusting the vacancies of Dotmatics to the Eastern European IT market, and using executive search to hire the best candidates. What is even more, we allocated an individual account manager to keep the client updated regarding the recruitment process and swiftly answer all their questions.

If you want to hire master COBOL developers in Eastern Europe, Alcor can help. We deliver full-cycle IT recruitment services for product companies in the tech industry, namely headhunting, RPO, candidate pre-screening, tech market analytics, weekly hiring reports, offer preparation, onboarding support, and recruitment marketing. Moreover, due to our 10-year experience in the Eastern European tech recruitment market, we make our clients scream WOW – since 4 out of 5 of our candidates receive invitations to interviews, while 98,6% pass the probation period. 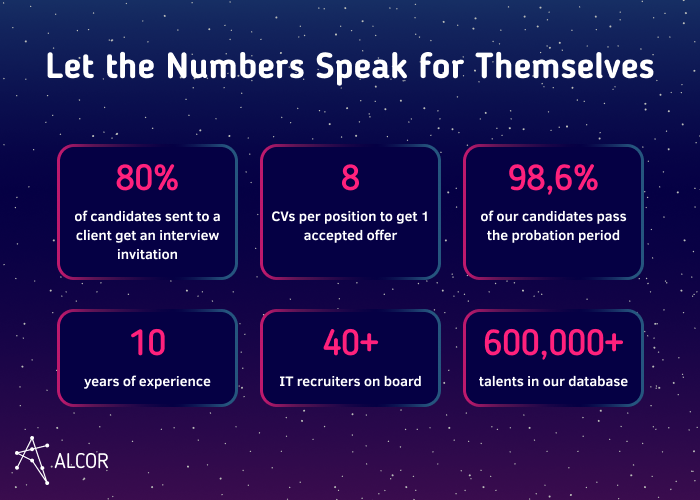 We have already helped Globality, Ledger, People.ai, Sift and others make their IT staffing dreams come true, while our other clients like ThredUP are enjoying the operation of their software research and development center and moving their product to the next level.

Need to hire 5 COBOL developers in 4 weeks? Just drop us a line. ЗВ'ЯЗАТИСЬ

🤔 1) Is there still a demand for COBOL programmers?

Yes, after the COVID-19 pandemic the need for COBOL developers increased. In the United States, unemployment insurance systems started failing because of overload and this is not the only reason why COBOL skills are in demand today…

💵 2) How much do COBOL developers charge in different countries?

In the USA, junior COBOL developers earn from $39,000, while senior specialists have the salary of $117,000 per year. At the same time, COBOL coders charge 2-3 times less in Eastern Europe.

💻 3) Should you hire COBOL developers in the future?

Yes, if your company actively uses mainframe applications built with COBOL and plans to keep maintaining/updating them.

💡 4) What is the most efficient way to hire COBOL coders?

The process of hiring COBOL developers is more efficient if you cooperate with a professional tech recruitment services provider. This partner can consult you on hiring COBOL coders in the chosen location, help you create the perfect candidate profile and job description, and match you with candidates that meet your requirements.