What is the Average React Native Developer Salary Across the World?

profile
Experienced IT researcher with a solid knowledge of sourcing tools for attracting the best tech talents.
11 min

While building native applications can be quite costly, more and more tech companies make their choice in favor of hybrid apps which are mostly created with React Native. This framework is used to power over 35,000 mobile apps, including some of the world’s leading ones like Microsoft OneDrive, Instagram, Skype, Netflix, Airbnb, and Uber!

But where can IT businesses make high-quality React Native apps for a reasonable price? Being an experienced IT recruitment company in Eastern Europe, Alcor knows the answer to this question. Continue reading this article to learn more about React Native developer demand, qualifications, and average salaries across the globe.

Back in 2015, technological giant Facebook initiated a hackathon. The most talented programmers were engaged in the creation of a revolutionary framework that could make mobile application development much easier, cheaper, and faster. That’s how React Native was born. This open-source JavaScript framework enables the creation of cross-platform applications which can run both on iOS and Android.

Nowadays, React Native is one of the best solutions for mobile development in the global IT market. According to Stack Overflow, it is in the top 5 frameworks used by professional programmers. So, let’s have a look at the core reasons for choosing React Native.

What makes React Native a real star is its ability to apply reusable code. Unlike some older methods, React Native interacts with existing native code and APIs, eliminating the need in building the same app for iOS and Android separately. In this way, tech companies can save up to 50% of development time and costs, while getting two high-quality native-like apps. This is one of the main reasons why React Native is so widespread among startups.

When utilizing React Native framework, tech enterprises can also cut their expenses on maintenance and debugging, as they are done on both apps at the same time. It’s also possible to invest savings in testing and iteration, making the app more sophisticated yet user-friendly.

In the past, hybrid technologies were the only option for cross-platform app creation. However, the appearance of the React Native framework has changed the rules of the game. Now developers can build superfast apps, making great use of GPU (Graphics Processing Unit) instead of CPU (Central Processing Unit). This enables React Native apps to perform just like the native ones.

React Native has some useful features, such as “live reloading,” which allows developers to preview the changes in the code when working on an app. In this way, engineers can get real-time feedback, making their programming process more expeditious.

5. Supported by the community

Choosing the right framework for app creation is a crucial decision in the development process. Sometimes unreliable solutions may lead to unexpected breakdowns and inconsistencies which could result in time loss and additional expenses. For its part, React Native is devoid of such “surprises,” since it is actively powered by Facebook. This tech giant makes all possible efforts to upgrade and debug the framework to maintain its high effectiveness and ease of usage.

Since React Native seems like a more expedient option for mobile app development, more and more IT companies make their choice in favor of this framework. That’s how the demand for React Native programmers keeps on the rise. For instance, in the USA, there are about 70,000 open vacancies: ZipRecruiter – 40,000; LinkedIn – 15,000; Indeed – 12,000.

Looking for React Native developers? We will close 1 position in just 3-6 weeks! ЗВ'ЯЗАТИСЬ

But are there enough React Native developers to satisfy these needs? Even though the US IT market has been going through a shortage of skilled engineers, the global React Native talent pool is far from being small. According to data from Statista, this framework is used by 42% of all software developers, the total number of which is 26,8 million. Continue reading this article to find out which destinations offer the most affordable rates for React Native developers.

When exploring the global market, you can choose between three expertise levels (junior, middle, and senior) that presuppose different sets of skills and professional knowledge. Naturally, the bigger the experience, the higher the salary is.

From my professional knowledge, I can say that for junior-level React Native developers it’s enough to know JavaScript, have a good understanding of the React Native framework, be experienced with basic testing methods, and have a thirst for knowledge and self-growth. On their part, middle React Native programmers should have a much broader array of coding skills. They need to be aware of all the necessary aspects of app development, deployment, and optimization. Senior-level experts in turn should be capable of both managing application development processes and React Native team performance. 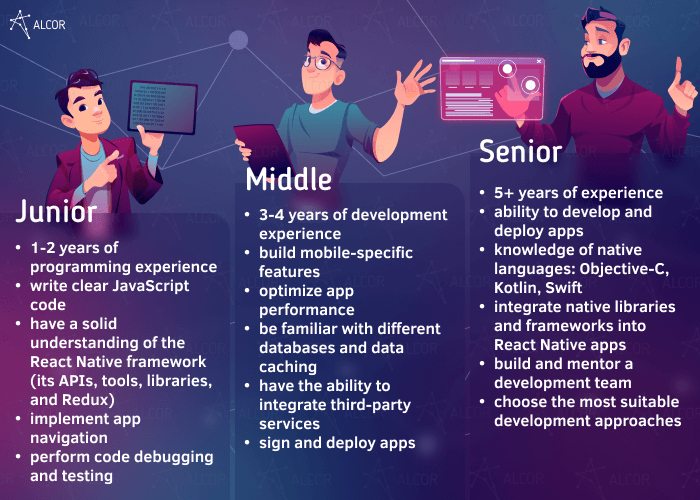 Now let’s see how the average React Native salary varies from one expertise level to another across the world. All currencies were converted to US dollars at a relevant exchange rate for November 2022.

Plenty of American tech companies (particularly the ones from San Francisco) use React Native for hybrid app development. Such high demand makes local IT professionals the most well-paid in the world, with California and New York providing the most generous remunerations.

The Canadian IT market is not lagging far behind, offering quite a similar average React Native developer salary as the USA: $50,000-$140,000.

Mexican React Native programmers receive much lower annual compensations than Canadian and American ones, which on average range from $39,000 to $70,000.

The React Native app developer salary in Brazil usually ranges from $40,000 to $75,000, depending on the expertise level of the specialist.

The engineer rates in Argentina resemble the ones provided in Mexico. For instance, a junior React Native developer salary here spans from $38,000 to $43,000.

Italian average remuneration for a React Native professional ranges between $31,000 and $58,000 annually.

In Spain, the React Native developer salary is almost the same as in Italy and France, with just a couple thousand dollar difference: $30,000-$62,000.

The React Native programmer reward in Norway ranges from $54,000-$96,000, making it an absolute leader in the region.

The average React Native mobile developer salary in the Netherlands spans from $48,000 to $85,000 per year.

Hungarian React Native professionals receive some of the lowest remunerations in the Eastern European region: $18,000-$55,000.

Let us assemble your own team of seasoned React Native devs in Eastern Europe! ЗВ'ЯЗАТИСЬ

Meanwhile, Indian React Native specialists are left behind with the lowest annual compensation among Asian countries: $15,000-$32,000.

As it’s known, JavaScript is not the easiest programming language to learn and use, as it works asynchronously, meaning that code testing and debugging are not of rare nature. The same thing refers to React Native, since it can only be used in pair with JavaScript. Hence, when choosing an offshoring destination, the expertise of local React Native developers should be your number 1 priority. Below you can see the basic set of qualifications a React Native developer should possess. 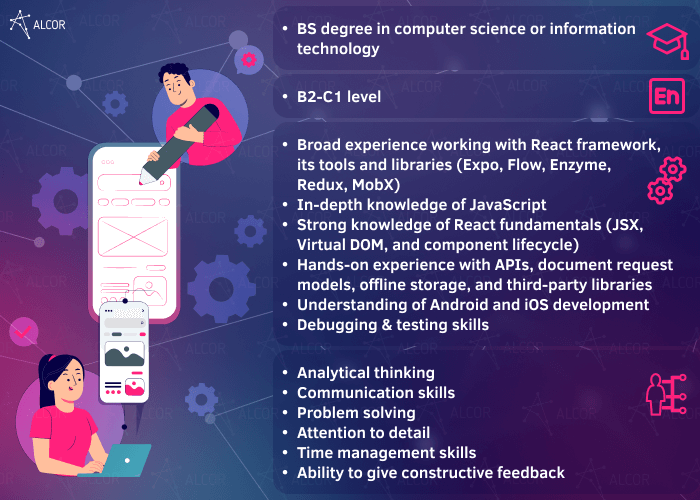 When it comes to hiring such skilled developers, I would definitely suggest you opting for Eastern Europe. Why? Here are just a few reasons:

In addition to skilled engineers, you will also be able to cut expenses by spending less on wages and take advantage of favorable tax conditions (5% income tax in Poland and 0% in Romania for R&Ds). Take a cue from such tech giants as Google, Apple, Microsoft, Oracle, Amazon, IBM, Adobe, Intel, Samsung, and Cisco who have long been enjoying both offshore web development and mobile app development in Eastern Europe.

Set Up a Team of React Native Talents with Alcor BPO

A US-based IT company Sift wasn’t a newbie in terms of cooperation with offshore programmers, as they already had over 50 people working for them from different parts of the world. As their business was growing, Sift set an ambitious plan — to expand their global team by 30+ IT specialists. This decision could have cost them a pretty penny if they didn’t opt for Eastern Europe. Since it was a new market for them, Sift needed an experienced IT recruitment provider who could navigate them through the whole process. That’s when they reached out to Alcor.

We assigned 14 IT recruiters and 1 account manager to undertake a full-cycle hiring process. Our team managed to hire programmers of various expertise levels and skill stacks, including Python, Java, Kafka, and React JS developers. Our tech recruiters also used executive search to headhunt a Front End Developer and Back End Engineer for Sift’s remote team. In addition to that, we assisted the company with legal compliance, IP rights protection, and procurements. As a result, our client got a fully-backed engineering team of 30 developers in just a year!

Apart from Sift, we have also hired senior/lead software developers for such US and European IT product companies as People.ai, Dotmatics, Ledger, ThredUp, and many others. Our 40+ IT recruiters screen candidates, prepare blind CVs, conduct interviews, make job offers, and provide other services to hire programmers with proven track records and suitable skills. That’s why we have an 80% CV pass rate, while 98,6% of our candidates successfully pass the probation period.

Alcor will recruit 5 Eastern European developers in a month and 100 in a year! ЗВ'ЯЗАТИСЬ

The most affordable senior React Native developer remunerations can be found in Hungary, Czechia, and India, where they span from $27,000-$60,000 per year.

🎯 Which region has the best price-to-quality ratio when it comes to building a React Native team?

If you’re looking for the destination where you could recruit highly qualified React Native coders for an affordable price, you should go with Eastern Europe. The annual remuneration for this type of developer varies from $17,000 to $80,000 in this region.