profile
Experienced IT researcher with a solid knowledge of sourcing tools for attracting the best tech talents.
10 min

There is probably no one in the market who hasn’t heard about the rapidly spreading programming language called Golang, or simply Go. Being applied only by the “chosen ones” at the beginning, it is now an actively used tool for web and mobile application development, system and network programming, and machine learning. According to the State of Software Engineers report, Go remains the most in demand language among IT companies for 2 years in a row, creating 1.8x more interview requests for programmers experienced in it.

But where can tech businesses find both qualified and reasonably priced Go developers? My team and I conducted some deep research into the current state of the Golang talent pool, its tech expertise, and average salaries worldwide. In case you are interested in swift and cost-effective recruitment of Go professionals in Eastern Europe, Alcor — an IT recruitment company — can help you with that!

Golang Developer Market Size All Over the Globe

Go is a general-purpose programming language that was created by Google to make their software development process both smoother and quicker. Originally, Golang was built to substitute its older brother C++ which was too difficult to learn and utilize. Consequently, Go language became a bundle of the best programming goods, while avoiding features that led to complex, unreliable, and unstable code. Such versatility and multifunctionality brought Golang to the top 15 programming languages in the Developer Survey 2021. But what exactly makes Golang a go-for language in the market? 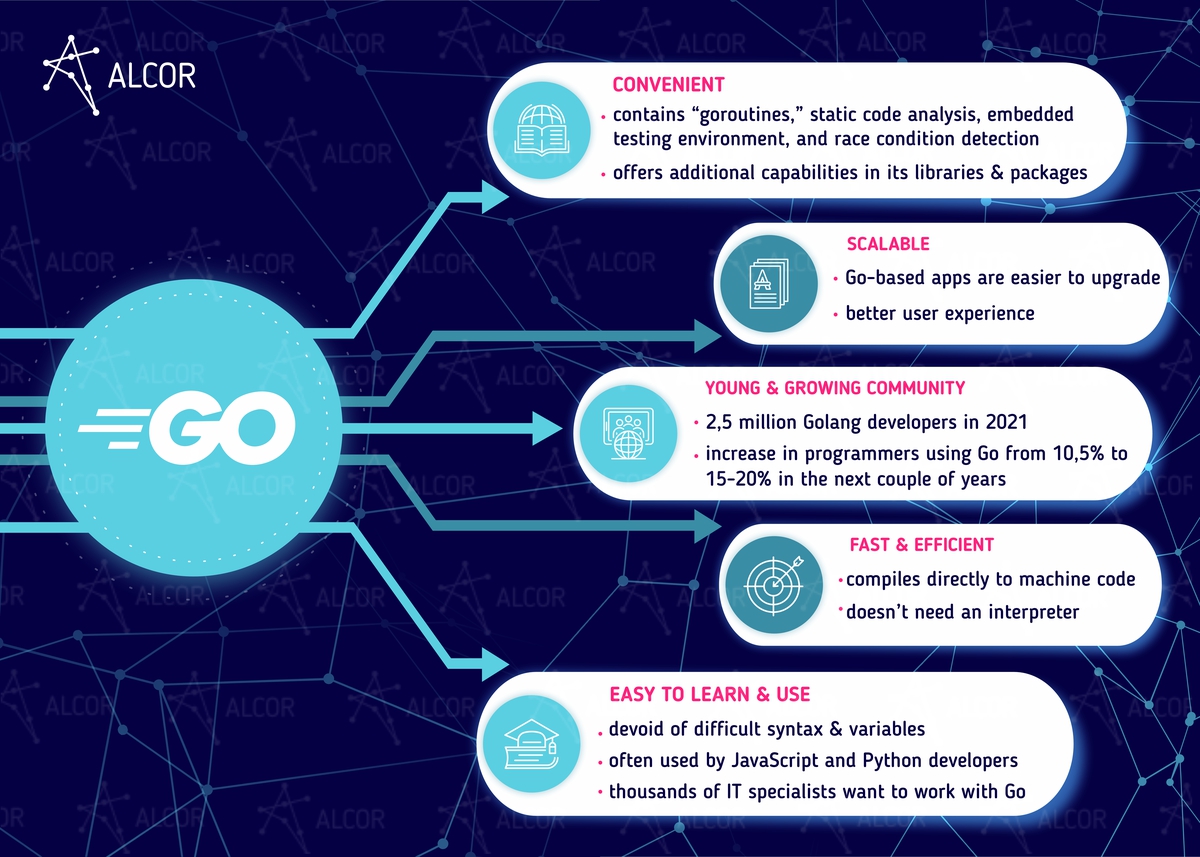 When it comes to the distribution of Go professionals across the globe, the largest pool can be found in Asia, where approximately 570,000 developers use Golang as their primary language. The second place is taken by Europe with about 250,000 Go developers. Then the list is followed by North America (about 200K) and Australia (135K), while South America and Africa have the lowest number of such programmers (under 100K).

Even though the Golang talent pool in North America is not that huge, the demand for these specialists remains quite high. In the USA alone, there are over 130,000 open vacancies on ZipRecruiter. Continue reading this article to find out about the location with the best price-to-quality ratio for hiring Go developers!

Before diving into the sea of Golang developer remunerations offered in countries all over the world, let’s have a look at the main factors which influence salaries.

One of the pivotal aspects that shape the salary of a Golang specialist is the level of tech expertise. When analyzing vacancies on ZipRecruiter, my team and I concluded that most companies are looking for senior Go developers with:

The majority of Go developers prefer working in IT product companies, as they tend to offer the highest annual compensations. There are over 2,700 businesses that use Golang in their tech stack. Among the leading IT players are Google, Apple, Microsoft, Facebook, Dell, Intel, IBM, YouTube, Slack, Twitter, and Spotify.

The Golang developer pool is not that huge due to this language being pretty young. Since the demand for Go specialists is rising while the supply remains quite insufficient, enterprises resort to paying higher remunerations just to get needed experts and retain them in engineering teams.

Each country comes up with its own rates for Go specialists, depending on market trends, economic situation, demand & supply indicator, etc. Let’s have a look at the data collected by my team from reliable local resources to identify destinations with the highest and lowest Golang remunerations. The local currencies were converted to US dollars at the relevant exchange rate for October 2022.

The growing demand for Go developers in the US market drives up the rates for these experts. As a result, the USA is an absolute leader in terms of the highest price tags for Golang specialists, with California and New York offering the most generous annual remunerations.

The Canadian IT market is not lagging behind. The average Golang developer salary here spans from $98K to $170K, depending on the expertise level of these specialists.

The average salary of a Go developer in Mexico is only $20K-$40K lower than in the above-mentioned destinations.

The average salary for a Golang developer in Argentina is quite similar to the one in Brazil: $48K-$97K.

The average Go developer salary in Germany is second highest in the region, spanning from $42K to $103K annually.

The Italian IT market stands out as the one with the most generous Go specialist pay scale, where a senior Golang developer salary is pretty much the same as in Germany: $79K-$100K.

Spanish Go professionals receive some of the modest annual compensations in the region, which on average span from $36K-$88K.

The annual reward of Golang programmers in Norway is the highest among the Western & Nordic European countries, keeping within the $48K-$110K range.

Swedish Golang developers are some of the most well-paid specialists in the region, earning on average from $42K to $102K.

In Austria, the senior-level Go experts receive an appealing annual wage, which is similar to the one in France: $72K-$93K.

The entry level Golang developer salary in Belgium is just about the same as in Austria, ranging from $42K to $50K per annum.

The Eastern European market is known for its moderate software developer wages. For instance, the median price tag for Ukrainian Go specialists spans from $20K to $72K, which is 3 times lower than in the USA.

Even though the Golang developer salary in Poland is slightly higher than in Ukraine, it’s still pretty modest compared to the one in neighboring Germany: $24K-$77K.

The compensation rates for Romanian programmers who use Go language are some of the lowest in the Eastern European region: $18K-$68K.

The annual reward of entry-level Golang developers in Hungary is almost the same as in Romania: $18K-$28K.

Go professionals in the Czech Republic earn on average from $19K to $70K per annum.

Even though China is considered a hotbed for Golang experts, their annual remunerations are pretty moderate: $37K-$75K.

For its part, Japan provides a much higher Go developer salary than China, which on average spans from $46K to $90K annually.

A top Asian country in terms of the highest Go developer salary is Singapore, where the reward for senior-level Golang specialists reaches $102K.

In India, the average Golang developer salary keeps within the $12K-$30K mark, which is about 3 times lower than in other parts of the region.

Tech Expertise Level of Go Language Developers Across the World

When selecting a destination for building an offshore team of Go developers, it’s essential to consider not only the existing remunerations, but also the expertise level of these specialists. A professional Golang programmer should have both profound hard skills and sound soft skills to bring the highest value to the software development process. You can see the basic skillset of a Go developer in the picture below. 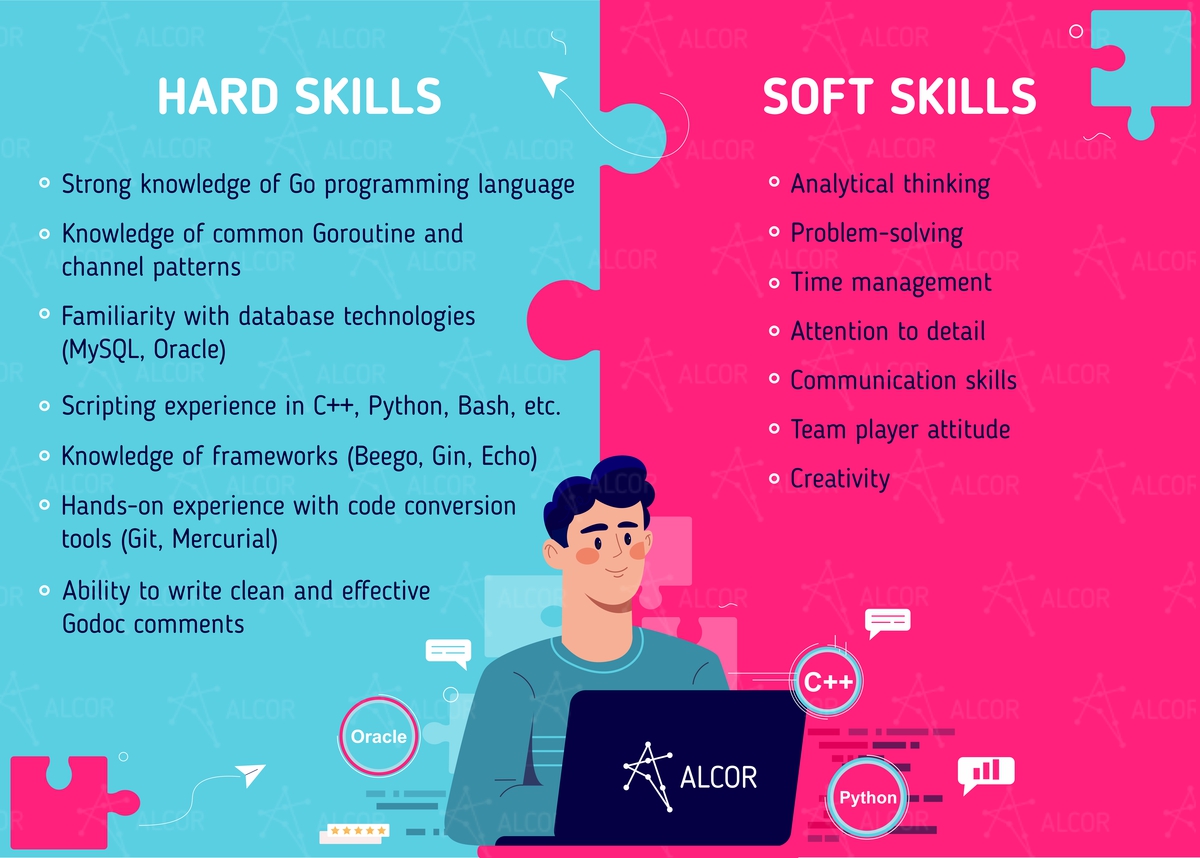 American tech companies tend to hire Go programmers in Asia (particularly, China and India), as this region has the biggest pool of Golang developers and lower annual salaries. However, there is a promising alternative to consider.

Eastern Europe is a real hidden gem that has a good price-to-quality ratio. Apart from the quite low cost of labor, this region boasts over 1 million qualified software developers (around 120K of which are Go specialists, according to LinkedIn). Their high tech competence is built on an all-round education that they can get in any of the 300 Eastern European STEM universities.

Moreover, IT professionals from this region have great multilingual abilities. Polish, Romanian, and Hungarian developers are in the top 20 by the English proficiency level. However, their knowledge goes beyond just English, as these software engineers also have a good command of German, French, and Spanish to name just a few. This fact makes them highly sought-after not only by American IT companies but also Western European ones, as clear communication is a key to productive cooperation (especially when it comes to managing remote teams).

Our 40+ IT recruiters will set up a team of seasoned Eastern European programmers for you! ЗВ'ЯЗАТИСЬ

Another vital aspect is cultural similarity. Having close affinity with western values and work ethics helps Eastern European developers to be highly adaptable to new working environments. Our clients People.ai, Grammarly, Sift, ThredUP, and others have already made sure about that. By joining their offshore engineering teams, these programmers demonstrated exceptional dedication, motivation for self-growth, desire to be good team players, and readiness to walk an extra mile when working on their product.

You may be wondering what the process of building a development team in Eastern Europe is all about. Let me show you the whole picture, using one of our successful cases — Dotmatics. This US product company wanted to take its scientific software development to the next level by hiring qualified Romanian and Polish programmers for a reasonable price. Dotmatics didn’t want to opt for IT outsourcing, as they wished to keep full control over their offshore web development. Thus, they reached out to Alcor and were amazed by the result!

We assigned 4 IT recruiters who provided full-cycle hiring of developers with different tech stacks, including a Director of Engineering, React, Full Stack Java Engineer, QA Automation, and Node.js developers. Moreover, we delivered the “wow” effect by headhunting a Product Manager, QA Engineer, and С++ developer with the first candidate! In the end, our client got a dedicated engineering team of 30+ IT specialists who continue making a valuable contribution to Dotmatics software development.

Alcor is a good example of a company that can provide high-quality tech recruitment services in a short period of time. We know that people are the essence of success. That’s why we screen all candidates thoroughly, testing their soft skills and cultural fit to make sure our clients get perfectly matching developers in their teams. As a result, it takes us not more than 8 CVs to get to 1 accepted offer, while 98,6% of our candidates successfully pass the probation period.

Let us build a dream team of Go developers in Eastern Europe for you! ЗВ'ЯЗАТИСЬ
5/5 - (1 vote)

🔎 1. Which countries have the highest Go developer salary?

Among countries with the highest annual remunerations for Golang professionals are the USA, Canada, Israel, and Australia.

The smallest annual Go programmer wages can be found in the Czech Republic, Romania, Hungary, and India. On average, they range from $12K to $70K.

🔎 3. Which region has the best price-to-quality ratio when it comes to hiring IT specialists for Golang development?

IT executives of American product companies can largely benefit from setting up offshore development teams for Go development in Eastern Europe. This region stands out as the best destination with both affordable costs of labor and highly competent tech experts.