Average Angular Developer Salary All Over the World Analysis

profile
Experienced IT researcher with a solid knowledge of sourcing tools for attracting the best tech talents.
11 min

In case you want to build highly responsive and robust web applications that perform well on any device, you might consider using the services of professional Angular developers. These specialists can build dynamic apps for enterprise and consumer use with improved performance, speed, and clear code. That is why a skillful Angular web developer is always in demand, while Angular is in the top 5 web frameworks used by professional developers.

However, if you want to hire the best Angular programmers you need to compare the salaries of these developers in different countries to ascertain other factors affecting the rates of Angular coders. Luckily, my team is there to help you! Recently, we created comprehensive world salary reports for PHP and React developers, so keep reading this article and learn about the most attractive locations to hire Angular developers in 2022!

What About Quality and Expertise?

Angular software developers use Angular, of course, which is also known as Angular 2. This is an open-source front-end framework based on TypeScript that is used to create dynamic web, desktop, and mobile applications. This framework is often mistaken for AngularJS or Angular 1, which is another front-end web framework that was developed at Google. However, the main difference between these frameworks is that Angular is faster, allows more scalability, and is better for developing enterprise-grade software with complex functionalities. What is more, a middle Angular.js developer salary is usually $110,000 per year while a middle Angular programmer’s compensation is around $117,000 per year in the U.S.

Qualified Angular developers must have a deep understanding of JavaScript, TypeScript, Angular, and RxJS library. They need to know how to work with modules, components, web services, build SPAs, perform unit tests, use GitHub, and build APIs with REST architecture. Senior-level Angular development engineers often have cloud coding skills, use AWS, and know .NET Core. Some projects require an understanding of other technologies like Spark or Ruby on Rails which are used in integration with Angular.

When it comes to soft skills, the most important ones for Angular developers are teamwork, flexibility and self-improvement, since Angular is constantly updating and one needs to keep up with it to stay competitive in the market. Beyond that, some Angular developers from Eastern European countries also have great time zone adjustment, an upfront approach to work, high levels of independence, effective communication, and many other essential soft skills.

Professional Angular programmers are available for hire in different countries, and the first one that comes to mind is the USA. Here, remote and in-house developers with Angular engineering experience are known for good education, fluency in English, and full compatibility with the American work culture. They deliver decent-quality software coded in Angular but at the same time charge over-the-top rates for their services. In San Francisco, an average Angular full-stack developer salary is $128,000 per year, while in Atlanta it’s $116,000. Apart from high salaries, Angular programmers from the US are also expensive in terms of employee maintenance and taxes that sometimes go up to 37%.

Another region that is famous for the wide range of Angular developers is East Asia, especially India. In contrast to their American counterparts, Indian Angular coders have low payroll taxes and compensation for their services. Nevertheless, if you want to hire Angular developers from India via outsourcing, outstaffing, or offshoring, you need to consider the specifics of working with a local third-party provider. They often fail to supply a sufficient level of IT infrastructure for their programmers, which leads to delayed deadlines and software quality below your expectations.

Want to hire Angular programmers in Eastern Europe? Let us help you! ЗВ'ЯЗАТИСЬ

Average Angular Developer Salary All Over the World: Key Takeaways

The salary of an Angular engineer differs from one country to another, and it takes hours if not days to compare the compensation of these specialists. If you’re reading this article, know that you won’t have to do it yourself, because we have already compiled this data from local reliable sources. In the table below, you can see the gross annual salaries of Angular developers in North America, South America, Western & Nordic Europe, Eastern Europe, Middle East, Africa, and East Asia:

The 2021 Developer Survey by Stack Overflow has shown that over 26% or 13,000 of surveyed professional developers prefer Angular. This framework is the third most popular and desired framework in the world. According to Statista, Angular is also among the 5 most popular technology skills in the JS stack, along with React, TypeScript, ES6, and Node.js. If you’re interested in the number of developers using Angular, it is 2,3 million users on GitHub alone. But it’s only a small chunk of all the people using Angular in the world. Another interesting fact is that Angular has over 80,000 stars on GitHub, which means that Angular-based projects are gaining popularity.

Regarding Angular developer vacancies, Jooble has more than 540,500 open Angular positions worldwide, Indeed – almost 32,500, while LinkedIn has over 45,500 open vacancies for programmers with Angular skills in the US, the UK, and the EU. 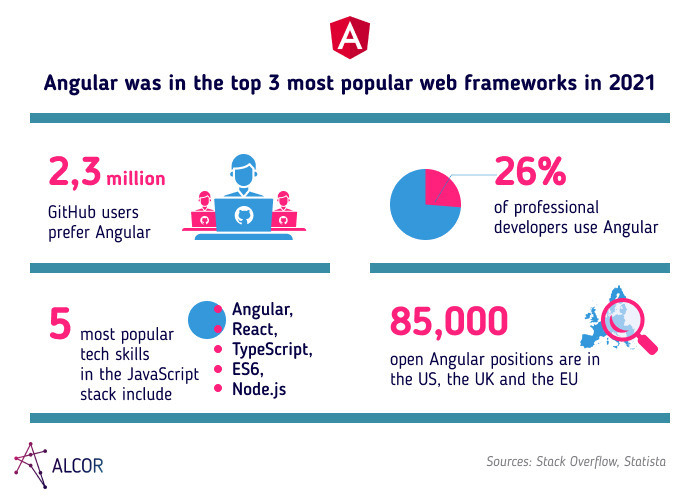 In the US an average Angular developer salary is usually the highest. In New York City, such a specialist charges from $102,500 to $138,000 per year. In Austin and Dallas, Texas, an entry-level Angular front-end engineer has an average salary of $94,500 per year, while senior-level developers of the same stack earn around $136,500 per year. In San Diego, a UI Angular programmer earns $136,750 on average annually; at the same time in Chicago, this number is $109,500.

In Canadian cities such as Toronto, Montréal, and Vancouver, an average senior Angular developer salary is $131,500. Junior-level specialists of the same stack earn $80,500 while middle Angular software engineers charge $104,750.

Angular engineers from Mexico have the lowest salaries in North America. They charge from $16,500 to $42,750 annually. UI programmers with Angular expertise receive $23,500 per year on average.

Argentinian developers have the lowest rates in South America. Here, a UI programmer with Angular experience receives from $11,250 to $30,500 annually.

The UK offers moderate Angular developer rates. In London, the Angular UI developer salary of a middle specialist is $75,500 per year, while in Glasgow the same programmer charges $53,500.

In Germany, the Angular engineer salary of a front-end specialist is $58,250 on average annually.

A senior full-stack programmer with Angular engineering experience charges $75,250 per annum in the Netherlands.

In Austria, programmers from entry to senior levels who are front-end Angular specialists earn $36,500-$65,750 annually.

In Norway, middle UI programmers with Angular skills have a salary of $56,750.

In Romania, a UI developer that uses Angular receives from $21,500 to $51,000. Here, salaries are the lowest in comparison with other Eastern European countries.

Czech UI programmers with Angular skills have an average salary of $42,500 while full-stack coders receive $40,000 yearly.

Indian Angular software specialists have the lowest salaries compared to other Eastern Asian countries and receive from $9,000 to $21,000 annually.

Angular 4 was different from Angular 2 in terms of performance speed, reduced file bundle sizes, had better compatibility with TypeScript versions, and the use of maps instead of parameters. An Angular 4 developer salary is about $93,000 annually.

At the same time, Angular 6 was a better and faster analog to Angular 4, which was focused more on tools and introduced support for multiple projects. Such programmers charge $81,000 on average in the United States.

Looking for the Best Angular Developers?

The best Angular programmers are easy to hire if you work with a professional recruitment services provider. Our company Alcor specializes in hiring senior and lead developers with Angular and other skills for big IT product companies. Such internationally renowned IT companies as Grammarly, People.ai, Samsung, BigCommerce, Ledger, Tonic Health, and many others have already taken advantage of our services.

Speaking of services that streamline the managing of offshore teams, we can hire a professional Angular developer or even set up a remote Angular software team for you in Eastern Europe. As part of recruitment marketing services, our team can conduct an employer branding campaign for you. This is a powerful brand image promotion tool that helps even small companies successfully recruit developers of senior and higher levels in their teams.

On top of that, our legal professionals can make sure you create and run a fully compliant business in both your country and Eastern European country, whether Poland, Romania, or Ukraine. Alcor handles tax planning, service agreements preparation, document maintenance, IP rights protection, and other IT compliance managed services that you might need for running your business in a foreign location. This even includes M&A deals support in case you need to purchase a company abroad, just like one of our clients: Luxoft.

A great example of how we make all of this work is our cooperation with People.ai. This international software product company that develops a smart platform to optimize sales in the B2B sector approached Alcor several years ago. Before they found our solution, the client had been struggling with opening their office and assembling a software team in Kyiv, due to unproductive cooperation with different vendors simultaneously.

We offered People.ai our full set of services – from IT recruitment up to payroll & accounting. Since our model is an all-in-one solution, where all these services are well-coordinated, we managed to set up an offshore software development center for our client in just 1 month. In the following weeks, our recruitment team hired more than 25 developers for People.ai, and most of them still work there. Backed up by complete legal, payroll, accounting, and other support of Alcor, the company keeps delivering outstanding results and even became a unicorn company in 2021.

Set up your professional Angular team in Eastern Europe with Alcor! ЗВ'ЯЗАТИСЬ

💡 Where are the lowest salaries for Angular developers?

Brazil, India, and Argentina have the lowest Angular developer rates in the world. There, a middle Angular software programmer has a salary of $17,750 per year.

💡 Where are the highest salaries for Angular developers?

In the USA, Angular programmers earn the most. Local Senior Angular developers charge almost $148,000 per year while their UI colleagues of the same level receive $144,750.

💡 Where is the best price-quality rationale for Angular developers?

The best price-to-quality balance could be found in Eastern European countries, such as Poland, Romania, Hungary, the Czech Republic, and Ukraine. Here, full-stack programmers with Angular knowledge have a salary of $23,000-$67,500 (with excellent hard & soft skills).

💡 Is there a difference in salaries between Angular 2, Angular 4 and Angular 6 developers?