Thanks for your message! We won't leave it alone! ? We will get back asap but no longer than 24 hours. Thank you and looking forward to talking to you soon! 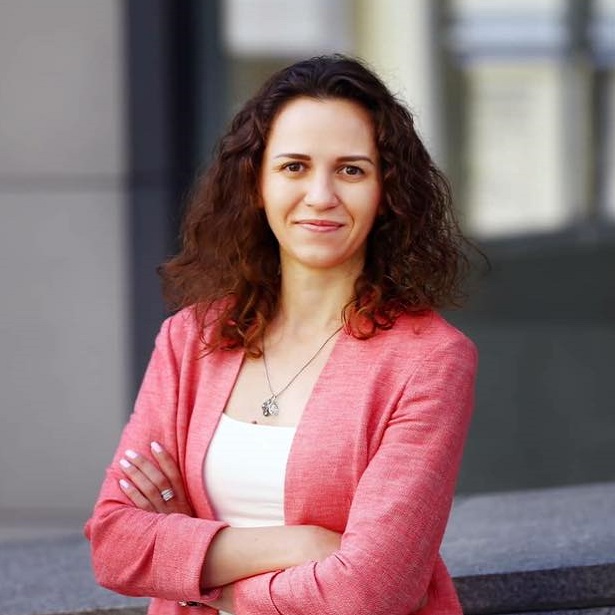 Poland has long been on the list of rapidly growing IT markets. Following the recent reports, there are more than 400 000 qualified developers in Poland, with an upward trend thanks to high-quality education. Software development businesses in Poland currently number about 63000. It is also one of the safest countries to launch a business in Eastern Europe since the industry follows EU business regulations. That is why more and more tech businesses are embracing the opportunity to engage talented Polish programmers, run their companies in Poland and benefit from its stable and promising market.

However, although software development in Poland is progressing at an unprecedented pace, it is often challenging for a tech company to figure out Polish taxation. The main question is finance — is it worth recruiting a development team or setting up a development company, and how much money can business owners save, considering Polish taxes? We at Alcor specialize in IT recruitment services in Eastern Europe, operating predominantly in the Polish IT market. Thus, in this article, I’d like to fill you in on the basics of taxation in Poland and give some advice for IT businesses and developers.

Taxes in Poland for Tech Business

Tech businesses in Poland pay Corporate Income Tax (CIT). The standard tax rate is 19%, but it may vary depending on the company’s revenue. However, startups (companies established during the fiscal year) and small businesses (that earn less than 2,000,000 EUR yearly revenue, including the VAT due) may enjoy preferential taxation at the rate of 9%. Additionally, in certain cases, a 5% CIT applies to the qualified income generated from specific IP rights.

CIT is administered electronically. Business owners are required to pay CIT advances monthly, in particular by the 20th day of each following month. For startups and small businesses, there is an option to switch to paying CIT advances on a quarterly basis. After the end of the fiscal year, all businesses should file an annual tax return and pay the due taxes within three months (if the company’s tax liability is not fully paid with CIT advances).

In addition to CIT, a tech business in Poland may be subject to other obligatory payments, such as social security contributions for personnel hired under the employment contract. Such payments are covered at the employer’s expense. However, the financial burden levied on the company may be minimized, especially if it chooses to engage the staff based on an alternative model of cooperation — the B2B contract — which I will explain in more detail below.

Although it may seem that launching a business in Poland is relatively easy, ever-changing Polish legislation makes it second in Europe and tenth in the world regarding business complexity, according to the Global Business Complexity Index. Therefore, it will take a while to sort everything out on your own.

Learn more about how to build your development team in Poland! CONTACT US

To begin with, there are two contracts for developers in Poland. The first one is a traditional employment contract (Umowa o prace) under which the company hires the IT specialist as an employee according to local labor legislation. Such a way usually suggests an additional financial and administrative burden for the business. Alternatively, there is another type of collaboration commonly chosen in the tech industry — a B2B contract (Umowa Zlecenia). Under this contract, a developer, acting as an independent provider, undertakes to render IT services to the company. The remuneration can be paid similarly to regular salaries. To use this option, a developer should preliminarily register as a sole trader to provide services in a tech-related field.

The key difference between the employment contract and B2B contract is that in the first case, taxes and social contributions are withheld and remitted by a company, though mostly at the developer’s expense, whereas, in the second option, the said responsibility lies on the developer’s shoulders.

Speaking about tax rates, Poland offers a number of options for programmers. If developers are engaged within the employment model, they should pay their Personal Income Tax (PIT) determined according to a tax scale, under which the salary may be either taxed at 12% or 32% rates. The 12% rate applies to the annual salary up to PLN 120,000, and the 32% rate is used for the annual salary exceeding PLN 120,000. PIT, similarly to CIT, is administered electronically, and annual tax declarations should be submitted between February and May via an official government platform called e-Urząd Skarbowy.

Otherwise, if the cooperation is based on a B2B contract, developers can either pay a flat tax (19%) or opt for a lump sum tax (12% or, in certain cases, 8,5 % depending on the types of services provided). In general, a lump sum tax is more beneficial compared to the application of a flat tax rate, which is why developers usually prefer this option.

Another point to consider when speaking about taxes in Poland is that the employment contract involves the remittance of social security contributions that constitute up to 35% of a developer’s salary: the employer pays between 19.21% and 22.14% (depending on the amount of work accident insurance), while the rest is deducted from the developer’s salary.

As to the B2B contract, developers are obliged to pay social contributions on their own. The fixed sum is calculated depending on the developer’s annual revenue, as described in the table below.

Which Tax Is Most Cost-Effective?

Now, the burning question is which tax rate is the best for programmers. All things considered, in the picture below, we look at how much a Middle Full-Stack Developer (React.js, Python) is supposed to pay according to the contract of employment or B2B contract. 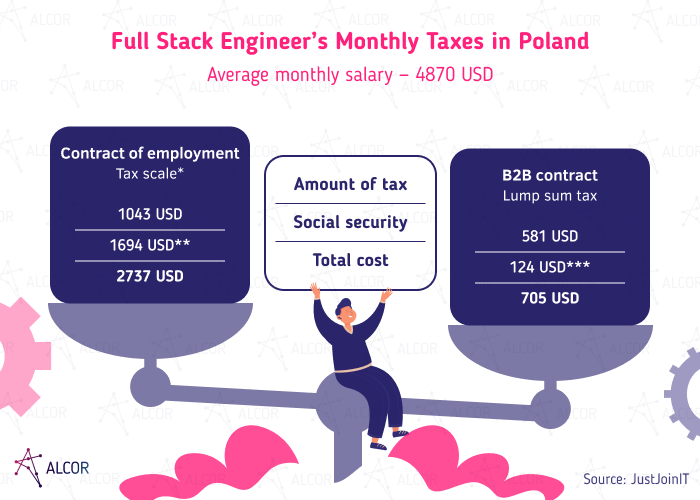 On the whole, junior specialists prefer a contract of employment that allows them to focus on gaining experience instead of managing their taxes. Middle and senior specialists can already offer a range of services and thus tend to register as sole proprietors, signing a B2B contract that allows paying taxes at a lower effective rate.

Consider Alcor BPO As Your Trusted IT Recruitment Provider in Poland

At first glance, taxes in Poland are baffling and complicated, but you can sort them out, provided you have legal help or ample time to read through the requirements and calculate all possible outcomes. On the other hand, if your goal is to build a dedicated development team in Poland within the short term, finding a trusted recruitment service provider is recommended. Not only will they ensure that you find experienced specialists with relevant skill sets, but they will also consult you on all legal tips and tricks.

Alcor is an international recruitment service provider specializing in offshoring software developers and team augmentation in Poland, as well as other countries in Eastern Europe. Our expertise covers tech recruitment from talent search to employment, plus employer branding, and various consultations on recruitment process outsourcing in Eastern Europe.

Dotmatics, a US scientific software company, is one of our illustrative cases. The company decided to step back from its previous IT outsourcing model and aspired to create its own team in Eastern Europe, which is how it found Alcor BPO. The main concern of Dotmatics was that they wanted to grow fast and find more than 30 software engineers within a year, but they also didn’t want to lose out on key skills. Earlier, we had successfully assisted Sift, an IT product company, in its team extension, so we knew perfectly well how to help Dotmatics.  We found 30 experienced developers within a year, many of whom were chosen as the first candidate for the position.

Apart from that, we helped them set up B2B contracts, ensured they chose the best rate for taxes in Poland, and assisted the team in tax payments.

🔎 What taxes do tech businesses pay in Poland?

The standard Corporate Income Tax rate is 19%. However, startups and small businesses may be taxed at the lower rate of 9%. Also, certain types of income generated from a specific range of IP rights may be subject to the preferential 5% rate.

💵 What is the Polish tax rate for developers?

Depending on the model of cooperation and applicable taxation regime, Polish developers can be obliged to pay a tax calculated at a tax scale (the rate could be equal to 12% or 32% depending on the annual income), a flat tax (19%), or a lump sum tax (8.5 or 12% depending on the types of services provided). A B2B contract results in a smaller tax, and the lump sum tax is the most recommended option for software engineers.

🎯 How is it best to choose the tax rate?

In terms of taxes in Poland, deciding on the preferred tax should be based on careful calculation and legal advice. If you aim to choose the tax rate for your development team in Poland, you can turn to a seasoned recruitment service provider to receive legal help and more.

Case studies we are proud of

Rare software engineers for People.ai within one month
Case:
People.ai develops the AI platform for sales teams, which requires rare engineering skills. The startup decided to hire IT talents with a special technology stack in Eastern Europe and started to work with several providers at once that resulted in...
View case
R&D team of 30 developers for BigCommerce from scratch
Case:
BigCommerce decided to leave their IT outsourcing provider to keep product development in-house. They decided to open an offshore development center with their own team of engineers in Eastern Europe. Our cooperation started from office searches and hiring skilled software developers...
View case
Effective IT recruitment for Tonic Health
Case:
Tonic Health is a product tech company from the US that ventured to enter the Ukrainian labor market to build a team of developers. Having no recruitment providers, the company faced the challenge of hiring senior engineers...
View case
See all case studies

Your Own R&D Office News
What is a Dedicated Offshore Development Center and How to Set it up Right?
Sergey Ovcharenko
In 2022, the IT industry continues to get more and more globalized. With the intention to refrain from outsour ... Read more
10 min
Your Own R&D Office News
IT Outsourcing to Poland Overview
Sergey Ovcharenko
IT outsourcing is one of the ways to reach talented software developers and save costs. In pursuit of this, we ... Read more
11 min
Your Own R&D Office News
11 Tips for Managing a Global and International Team Effectively
Dmitry Ovcharenko
Business expansion goes across different countries, creating borderless job opportunities while assembling tea ... Read more
9 min
ALL ARTICLES
Share this article
Facebook Twitter LinkedIn
Have a question?
This website uses cookies and other similar technologies for technical purposes and, with your consent, for other purposes. Please see the details in our Cookie Policy (click the "Read more" button). You can freely withdraw your consent at any time either by visiting the Cookie Policy page or by contacting us. Please note that if you click the ‘Reject’ button, close this banner, ignore it, or withdraw your consent, then some parts of the website may not be functional or accessible to you.ACCEPT Reject Read more
Privacy & Cookies Policy