Thanks for your message! We won't leave it alone! ? We will get back asap but no longer than 24 hours. Thank you and looking forward to talking to you soon!

profile
Experienced IT researcher with a solid knowledge of sourcing tools for attracting the best tech talents.
7 mins

Building highly scalable and reliable websites to promote products and services can be costly. That’s why many IT companies choose Django, a free open-source framework that can make the web development process both cost-effective and expeditious. Over 81,500 Python-based websites were created with this tool, including such famous web applications as Instagram, Spotify, YouTube, The Washington Post, Dropbox, Pinterest, and BitBucket.

If you also consider developing a website or application with Django but don’t know where to hire such experts, this article will come in handy! Continue reading to find out about destinations that offer the most affordable full stack Django developer salary rates.

Django was released in 2005 and was mainly used for creating and maintaining newspaper websites. Later, it evolved into a generic framework with a collection of modules, classes, and libraries that allow for the design of robust web applications. Powered by Python, the third most used programming language in the world, Django has been a go-for solution among developers and tech companies for several reasons:

Django maximizes web development by repurposing parts of the codebase instead of doing it from scratch, which saves lots of programming time. Its MVT architecture also helps developers to work on different components simultaneously and integrate them efficiently.

Since Django has a logical file structure and high readability of code, it doesn’t take Python developers too long to master this framework. This process is further facilitated with quality documentation and available tutorials.

Django is highly pluggable: developers can add or extract features and hardware to make scalable yet affordable web applications that meet current needs. Moreover, it is capable of coping with massive traffic demands which is vital for managing large-scale websites.

This fully formed framework can be used in almost all kinds of web projects (especially for multiple-page applications), regardless of their size and type, and by enterprises and startups alike.

Django has a big and mature community that keeps it regularly reviewed and updated. According to SlashData, there are currently over 8 million developers who code with Python, while 40% of them use Django.

It takes us only 3-6 weeks to hire 1 skilled Django developer in Eastern Europe! CONTACT US

Since Django provides myriad benefits for rapid and cost-effective web development, such specialists are highly sought-out in the market. Right now, there are more than 100,000 open Python Django vacancies in the United States: ZipRecruiter –70,000, LinkedIn – 37,000.

Expertise and Education of Django Developers across the World

You might be wondering how to hire a skilled Django developer who could build the website according to your business needs. A qualified programmer with Django knowledge would definitely need to be experienced with writing, implementing, and troubleshooting Python code. Since these professionals are full stack developers, they need to possess both backend and frontend technical skills. Therefore, your ideal candidate should understand such essentials as REST web services, system programming, software development lifecycle, and database modeling. 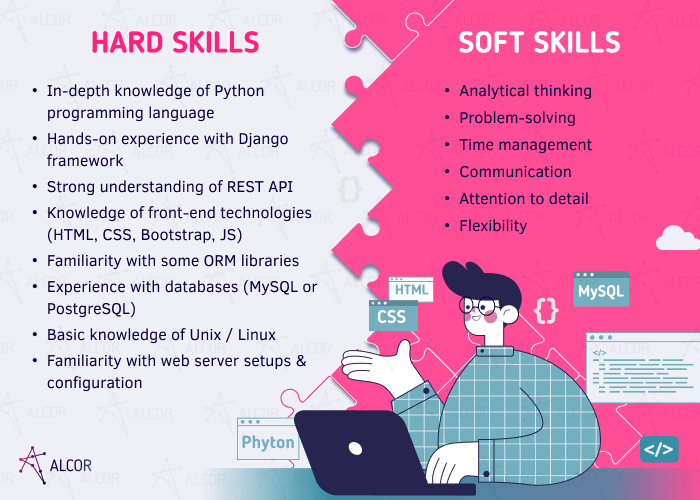 Even though higher education is not always a necessity, especially for IT professionals with narrow specializations, it’s preferable for your candidates to be certified in Django. For instance, Python and Django Full Stack Web Developer Bootcamp and Python Django Dev to Deployment are some of the best courses in the IT industry, as they provide programmers with both theory and practice in web development.

Now let’s have a look at the current salary ranges for Django developers in various locations globally.

Current Salary Ranges of a Django Developer in North America

In the US tech industry, Django professionals receive really successful salaries, especially in such states as California and New York.

Average Salary of a Django Developer in South America

The average Django developer salary in Germany is one of the highest in the region: $63K-$105K.

The median salary of a Django developer in Italy constitutes around $63,000.

The Spanish tech industry provides some of the lowest annual remunerations for Django experts: $50K-$85K.

The average salary a Django web developer makes in the Netherlands resembles the one in Germany: $60K-$105K.

A junior Django developer salary in Sweden is just the same as in France: about $57,000.

A senior Django developer salary in Poland is the highest in Eastern Europe: $68,000.

Need seasoned Django developers? We can hire them for you in Poland or Romania! CONTACT US

The average Django web developer salary in Hungary is quite modest: $27K-$57K.

Junior Django developer salary in the Check Republic constitutes around $22,000.

The Python Django developer salary in India is the lowest among Asian countries: $13K-$35K.

Alcor BPO Can Help You Find Skilled Django Developers for Your Tech Team!

Hiring cost-effective yet well-versed software developers is a real challenge. Still, there is one destination that has a perfect price-to-quality ratio – Eastern Europe. That’s where a US-based product company Sift decided to scale up their research & development team by 30 programmers. To accomplish their goal, Sift reached out to Alcor BPO.

The entire process of building out a development team for our client lasted for a year. It included a full-cycle IT recruitment and employer branding campaign, as well as tax payment and procurement management. To headhunt only the best software engineers, we assigned 13 IT recruiters and 1 account manager who assisted Sift on each hiring stage. As a result, our client got a dedicated team of 30 Eastern European developers, including Python, React JS, and Java specialists.

If you’d also like to set up a fully backed offshore software development center like Sift, People.ai, Dotmatics, and ThredUP, Alcor will be pleased to help you! We have been providing IT recruitment services with operational support for over 10 years. Our 40+ tech recruiters use a network of 600,000 Polish and Romanian programmers to hire a perfect fit. That’s why 98,6% of our candidates successfully pass the probation period. We vouch for the quality of our IT recruitment services, providing a 3-month warranty to substitute a candidate free of charge!

Since the development of Python-based websites remains quite a widespread practice, Django developers are in demand; therefore, they earn a decent annual wage. However, it can still vary depending on the developer’s location. For instance, in Eastern Europe the payscale ranges from $20K to $68K.

The highest Django developer salary can be found in the USA, Australia, Canada, and Norway, where it ranges from $65K to $145K, depending on the expertise level of this specialist.

🔎 3. Which destinations have the lowest average Django developer salary?

Among the countries with the lowest average Django developer remuneration are Romania, Hungary, Czechia, Mexico, and Argentina. Read this article to compare their rates and choose the most beneficial offshoring location.

Case studies we are proud of

Rare software engineers for People.ai within one month
Case:
People.ai develops the AI platform for sales teams, which requires rare engineering skills. The startup decided to hire IT talents with a special technology stack in Eastern Europe and started to work with several providers at once that resulted in...
View case
R&D team of 30 developers for BigCommerce from scratch
Case:
BigCommerce decided to leave their IT outsourcing provider to keep product development in-house. They decided to open an offshore development center with their own team of engineers in Eastern Europe. Our cooperation started from office searches and hiring skilled software developers...
View case
Effective IT recruitment for Tonic Health
Case:
Tonic Health is a product tech company from the US that ventured to enter the Ukrainian labor market to build a team of developers. Having no recruitment providers, the company faced the challenge of hiring senior engineers...
View case
See all case studies

Tech recruitment
What is the Average React Native Developer Salary Across the World?
Nadiia Kovalchuk
While building native applications can be quite costly, more and more tech companies make their choice in favo ... Read more
11 min
Tech recruitment
Engineering Manager Salary in Tech Companies: Worldwide Market Analysis
Nadiia Kovalchuk
Software development teams are the main asset of any IT company, as they are the driving force towards busines ... Read more
8 mins
Tech recruitment
Average Node.js Developer Salary: Worldwide Rates Overview
Nadiia Kovalchuk
More than 6.3 million websites use Node.js (or Node), making it the most widely used platform in the US. Areas ... Read more
14 min
ALL ARTICLES
Share this article
Facebook Twitter LinkedIn
Have a question?
This website uses cookies and other similar technologies for technical purposes and, with your consent, for other purposes. Please see the details in our Cookie Policy (click the "Read more" button). You can freely withdraw your consent at any time either by visiting the Cookie Policy page or by contacting us. Please note that if you click the ‘Reject’ button, close this banner, ignore it, or withdraw your consent, then some parts of the website may not be functional or accessible to you.ACCEPT Reject Read more
Privacy & Cookies Policy